Got a pet product? Want every and each pet parent in the world to know, talk about and use it?

Here is a list of the top pet bloggers and pet influencers who’ll help you create worldwide brand awareness and a huge campaign, with their creative approach to brands and their audience.

He first appeared in Katy Perry’s music video for Dark Horse in 2014 and started his career as a celebrity actor and personality who meets celebrities and influencers from all around the world. He won a lot of awards, has appeared on many TV shows and helped Zuckerberg present his new AR filters for Instagram, demonstrating them live from the stage.

He is a foodie and likes to dress up like other fluffy animals. 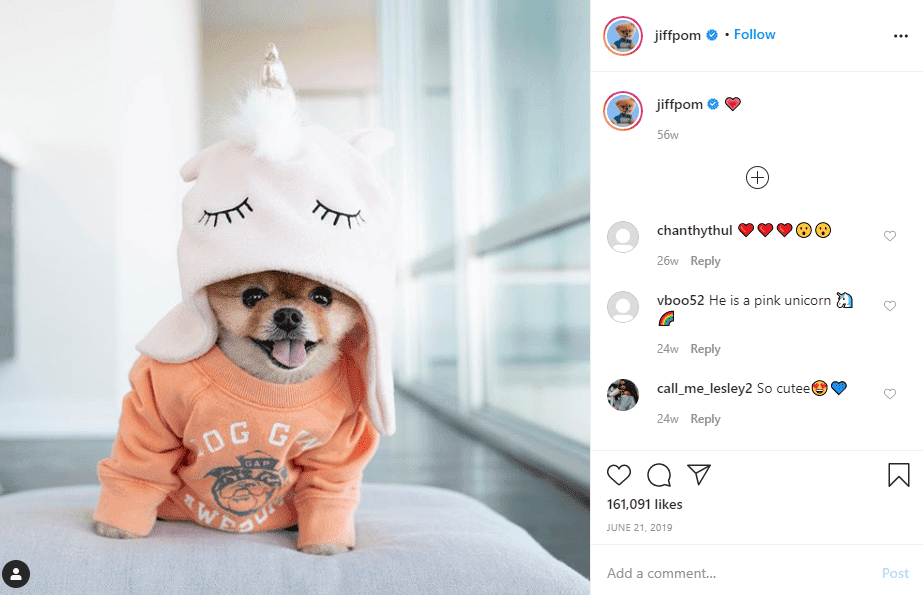 This lazy pizza lover has over 13 million followers across social media. He is a celebrity dog who has many celebrity friends including Justin Bieber, Ed Sheeran, Steven Tyler, John Legend and Chrissy Teigen, Shakira, and more. He has been called the “king of pop culture,” is a best seller in NYT, and winner of a number of awards. 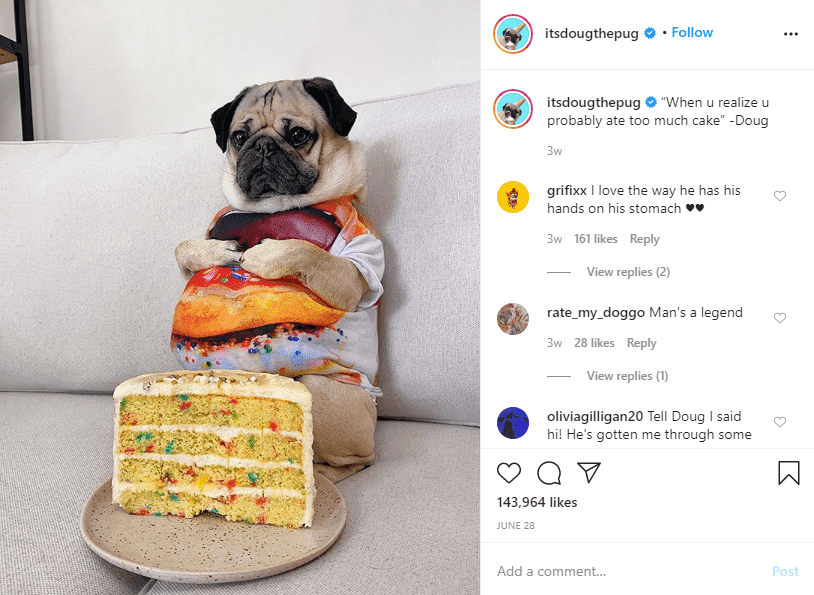 Tucker is the kind of lifestyle dog-influencer who likes doing ASMR and trying new food. He is tricky and curious, and what makes him even funnier are the thoughts and comments he makes in a doggish-humanish language.

His followers are actively engaged. Even with his sponsored posts! As he makes them funny when presenting the product in a natural way like his non-promo posts 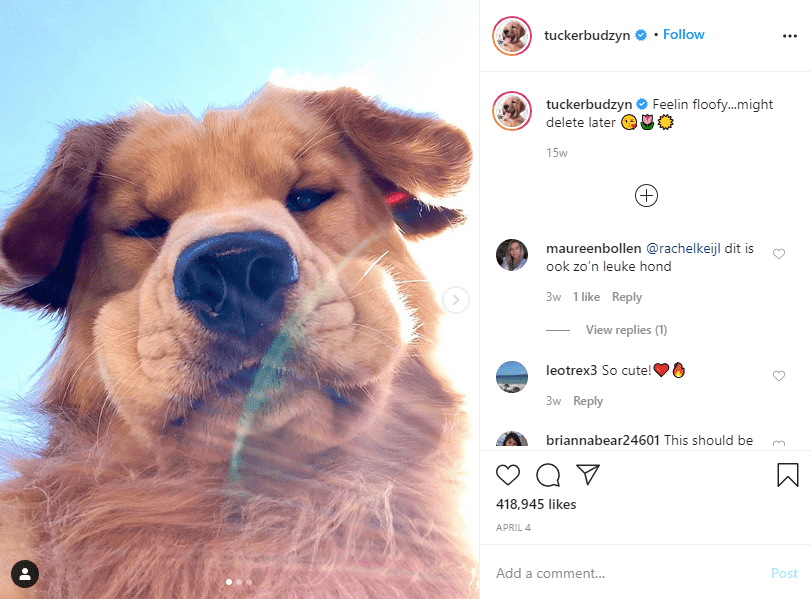 This Japanese Shiba Inu is adorably perfect! Just scroll a bit down on his feed and you’ll be infected with his cuteness.

His audience loves to make memes out of his photos which made him even more famous across the internet. 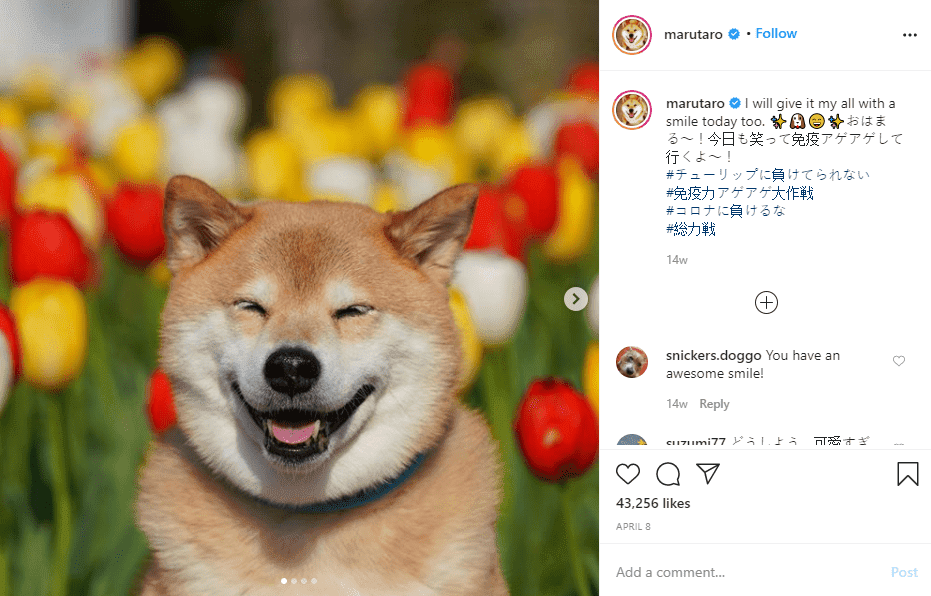 Tuna is a rescue dog with a pronounced overbite, whose memes went viral making him one of the most famous dogs on instagram.

His celebrity life continued with a book dedicated to him called “Tuna Melts my Heart: The Underdog With the Overbite,” featuring Tuna’s inspiring photographs. His mom uses Tuna’s fame to raise awareness for rescue groups and encourage adopting pets.

Tuna loves to travel. He even has another account dedicated to his traveling adventures. He is best friends with his baby sister and they share their daily stories for you on the dedicated @tunalovesgrace account. 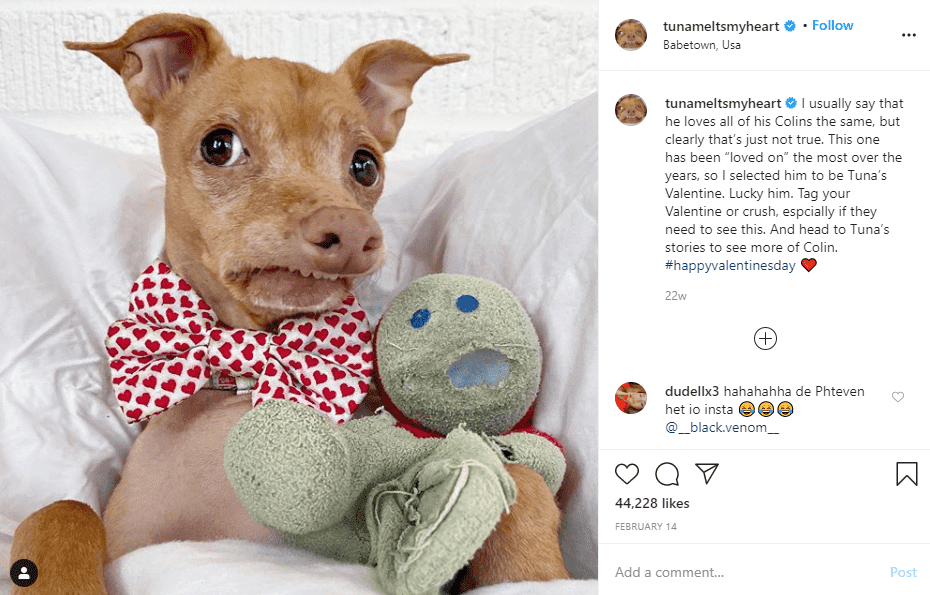 Karamelka the bulldog will amaze you with his outfits!

Although he doesn’t post too often, his audience waits impatiently knowing that something interesting is coming. He has an outfit for every situation and can enact every character from teacher to spider, from ballet dancer to cow. 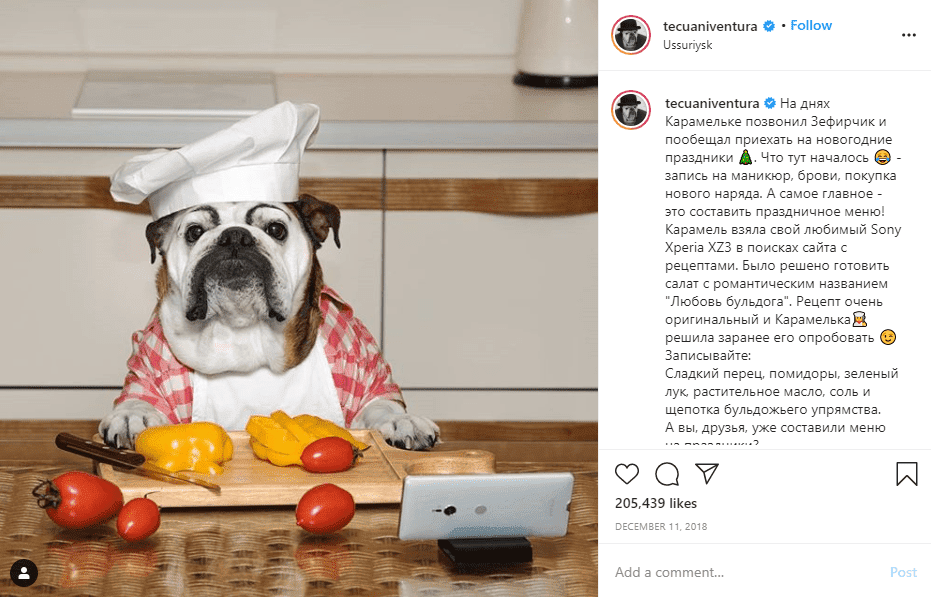 As you might have guessed, Loki is a mix of arctic wolf and malamute. After taking a number of successful shots, his owner decided to dig deeper into photography and conquer everyone’s hearts..

It goes without saying that a dog like Loki needs freedom in the wild to live his best life. He wanders with his owner in the mountains, enjoying sunshines and sunsets, snowboarding and more. 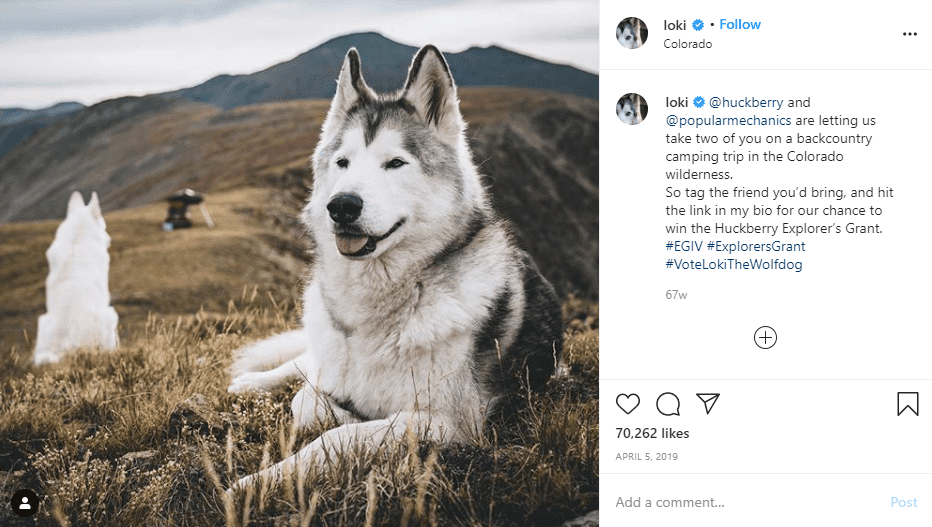 Maya the Samoyed is a furry bear of many talents. She is the queen of challenges and ASMRs and what’s most important to you, she’s active across almost all platforms.

People love to watch her doing all kinds of challenges and tricks. But she also has fans of her “thoughts,” that her owner adds to the videos. She can get in a real good mood when you need it!

This happy family started with Harlow and Sage — the bestest of friends in the world melting everyone’s hearts on the internet.

Sage passed away in 2013, leaving Harlow heartbroken, but her 2 new sisters Indiana and Reese helped her out. Now their family got even bigger, welcoming Ezra as their “big brother.” They love fluffy toys… to tear apart. Their friendship and everyday cuddles will make your day! 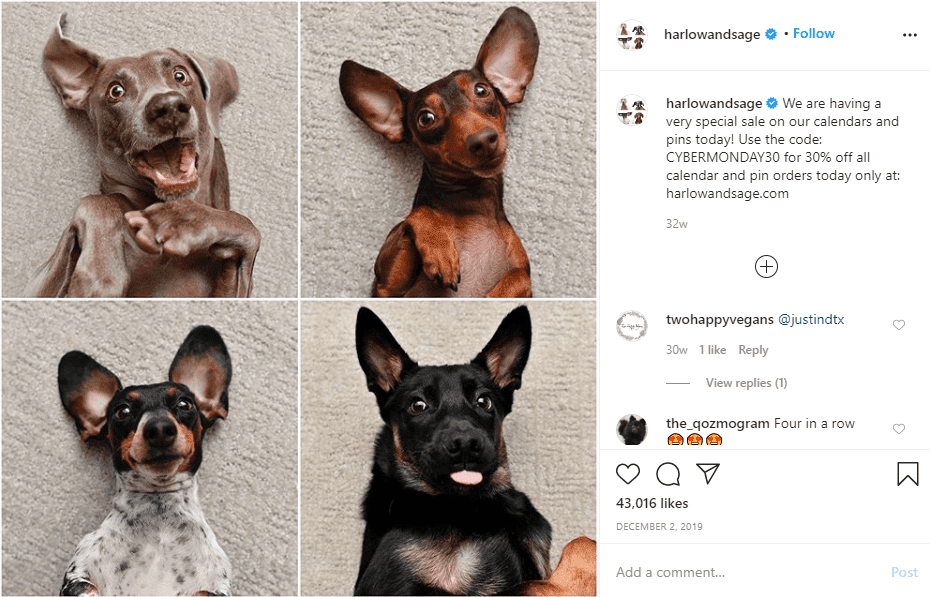 She is a member of Los Polinesios family of sibling bloggers/influencers with over 22M followers on YouTube. Together, they like to travel and do crazy things, and Aria has a huge part in their videos, getting millions of views on YouTube. 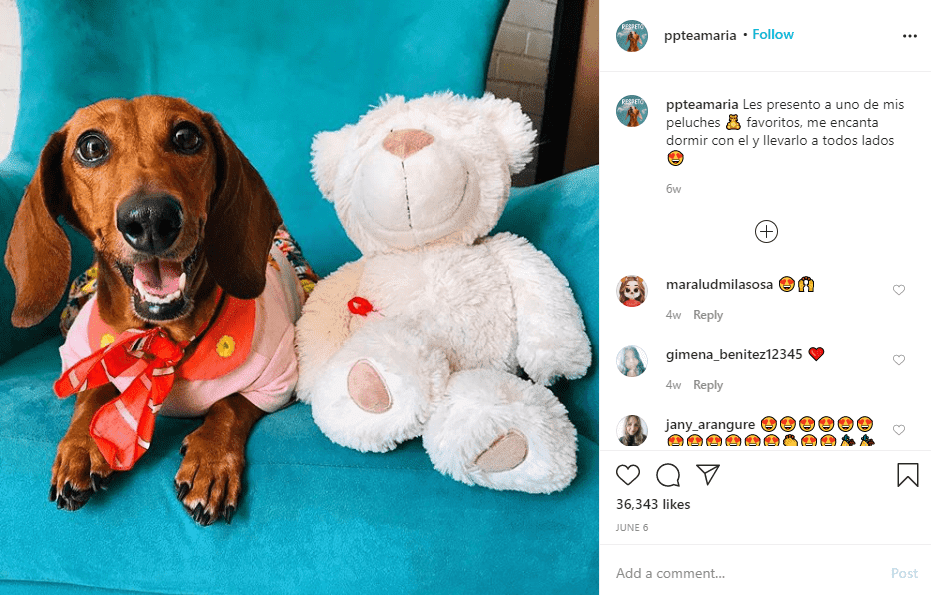 Oh this travelling duo! Their friendship is as amazing as they are. Henry the dog and Baloo the cat are both rescue animals, which, luckily, appeared to share the passion of their owners: hiking. 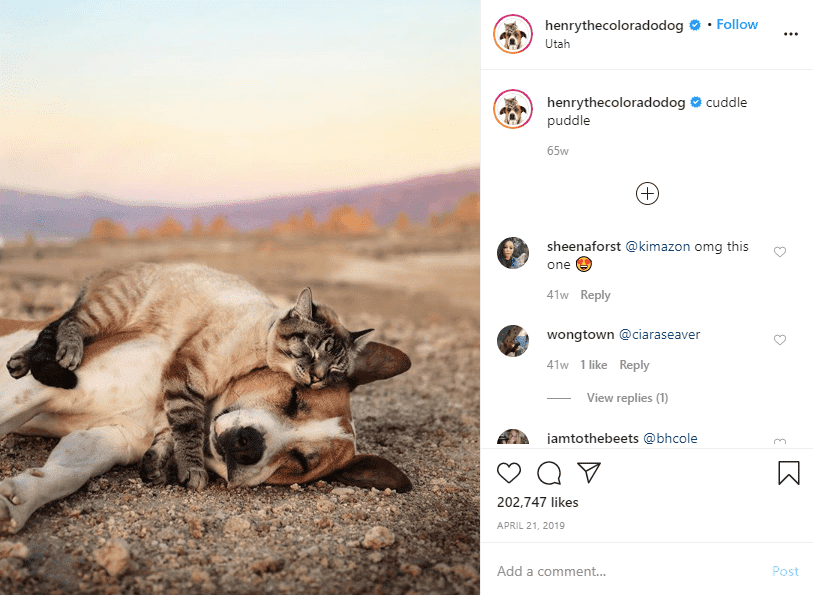 Maddie is lucky enough to have a parent like hers to be part of new adventures every day, travelling across the US. Maddie is known for her “acrobatic skills” standing on different unusual things.

She even has a book called “Maddie on Things.” 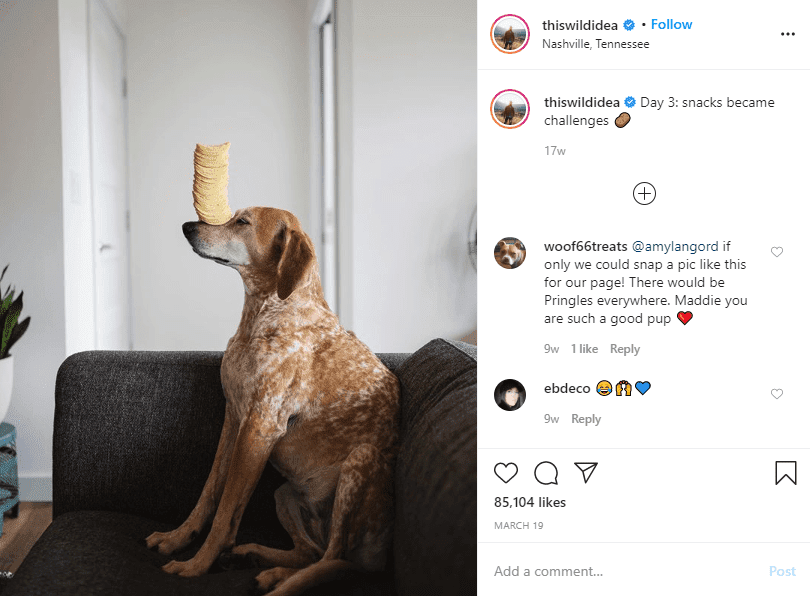 Manny is the most followed French bulldog on social media. He shares his everyday life with his followers and what they love most is his pics sleeping in a bathroom sink.

He also has a fund to help ones in need, from sick children to rescue dogs.

This family grew bigger and bigger, alongside their highly engaged audience.

It started with Millie and Rupert. Then their parents’ miracle baby boy was born and changed the feed completely. These big boys enjoy spending time with the baby, becoming his guardians and best friends. They are playful, love adventures and challenges. 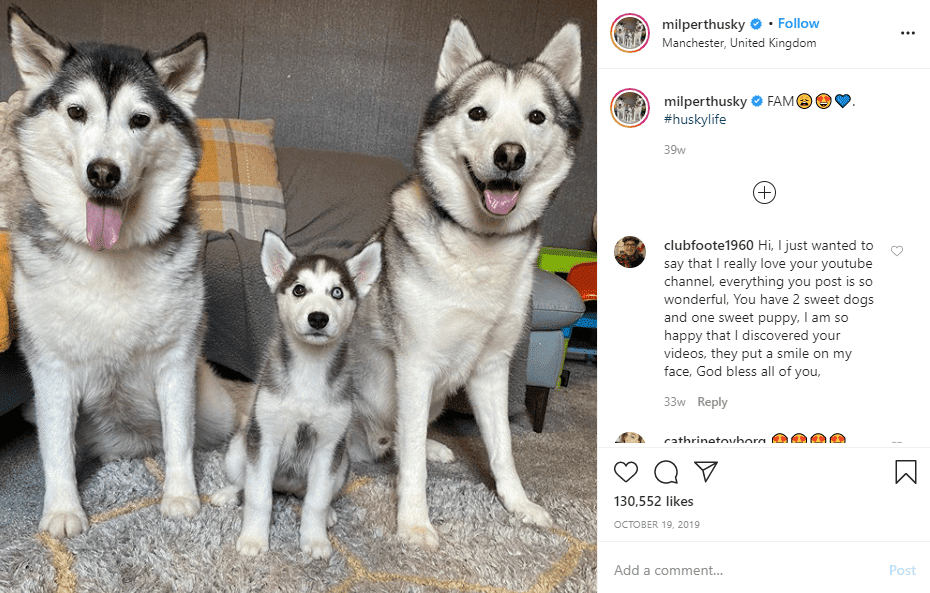 Watson and Kiko will make your day, and give you love and comfort only by looking at their photos. These two take everyone’s hearts by their hugging photos, and their devoted friendship.

Kiko has been fighting cancer for a year already, and lost his leg last year to it. But he stays strong and his audience supports him a lot. 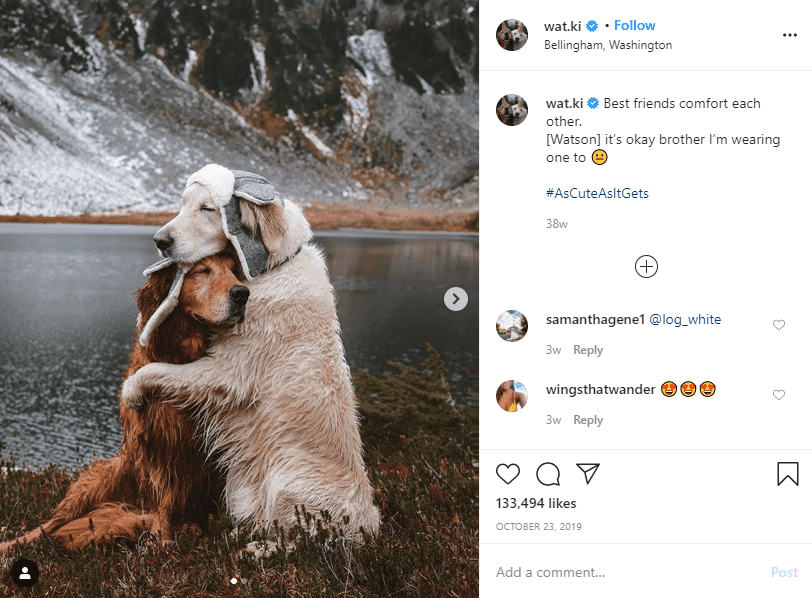 This little dog has a big heart! Norbert is a therapy dog volunteering at Children’s Hospital, well known for his high-five skills. His hanging tongue makes him even more lovable.

He eats organic and healthy food. 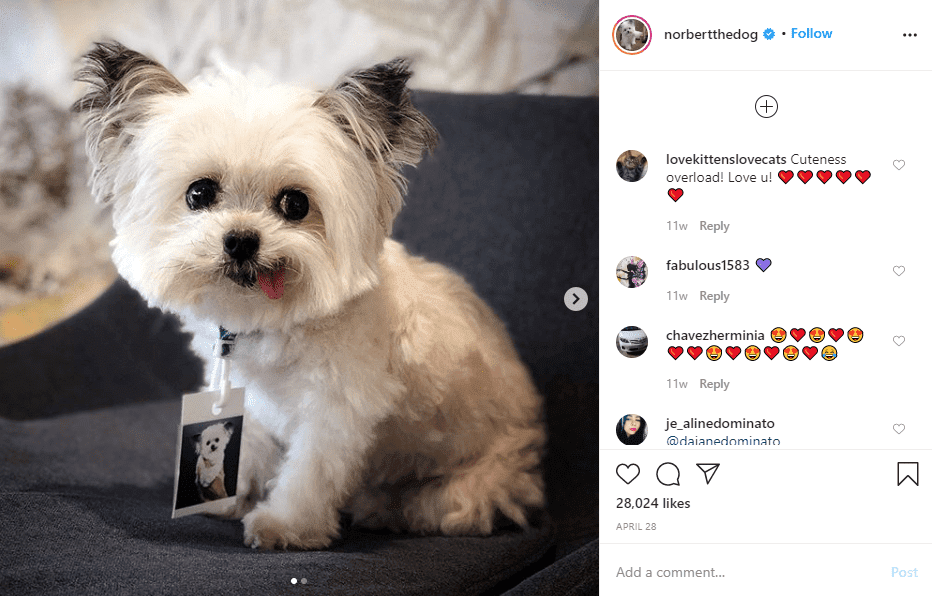 Crusoe is a dachshund who claimed himself a celebrity and eventually became one. He is known for his cool outfits and “grown-up” behaviour. He loves playing with balls, or just holding them in his mouth. 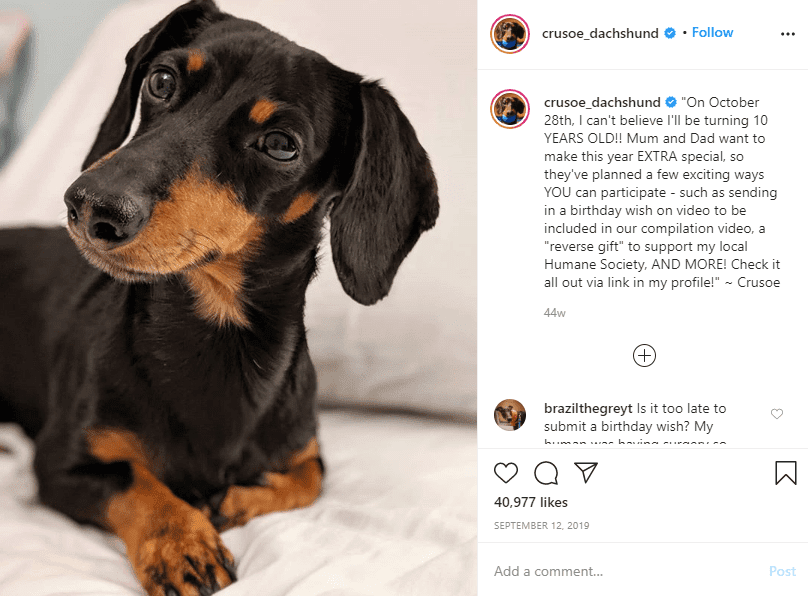 This family started with Loki the corgi, who passed away in 2016 leaving his account to his brothers Bear and Momo. And the audience loves them as much as Loki!

Bear came first and then they adopted Momo after fostering him for a month. They keep fostering doggos all the time and everybody around them is very hospitable.

Also known as the blueboys, Darren and Philip are super cute stuffies, who’ll bring a smile to your face. They are always together. Going on adventures, taking snacks, playing, cuddling and they often match outfits. Not only with each other but also with their parents. 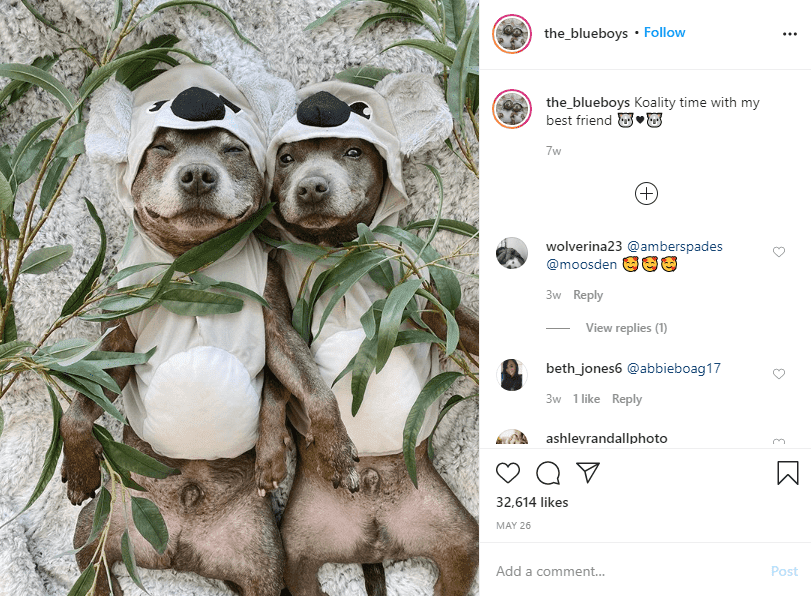 Andrew Knap is a designer/photographer and dad to 2 doggos, Momo and Boo. He started traveling the world with Momo, releasing a series of books of photographs called “Find Momo” for kids. See if you can find Momo playing “hide and seek.” 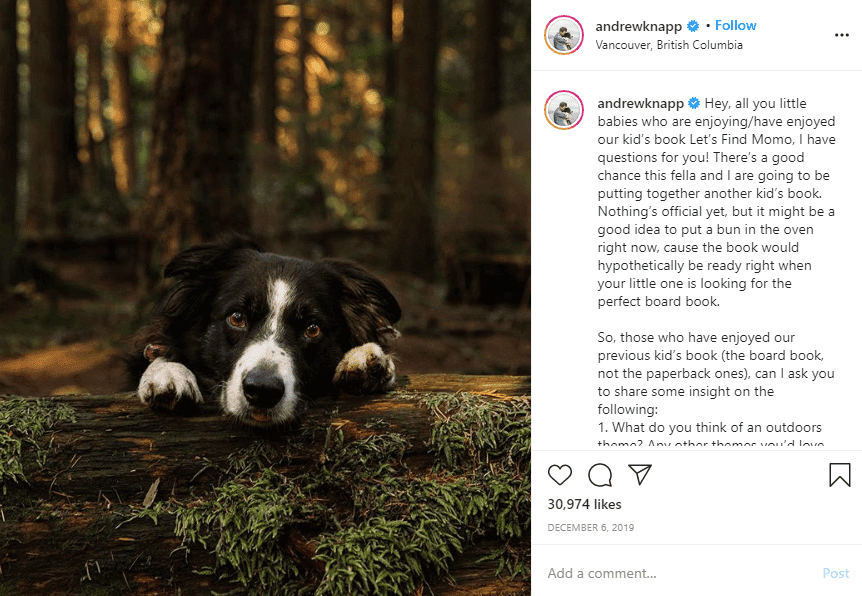 Wasn’t this the cutest listing you had ever seen? Besides being cute these babies have a huge power on buying decisions of pet parents who follow them. Due to high engagement rates and good relationships with their audiences, they can bring huge awareness to your brand and make it a must-have for every pet.

Furthermore, collaborating with pet influencers is a really fun experience.
Let me know if you found my listing useful by sharing your thoughts in the comments. 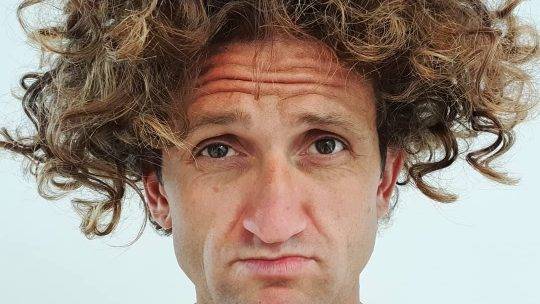 TOP Lifestyle Youtubers that will boost your brand’s visibility

What’s the first thing that comes to mind when you think about YouTube influencers? Lifestyle Youtubers, right? Well at least, they must make it in Top 3. For those who’ve never heard of them before, lifestyle youtubers are the creators that... 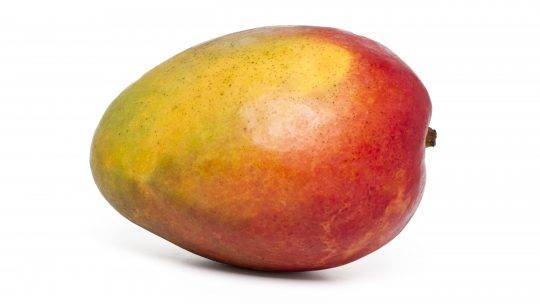 Mango Score: How do we measure influence

Every influencer marketer has run into confusion when it comes to collaborating with an influencer. Let alone when paying money for a sponsored post.  You start thinking which influencer is better… Who should you pay? How much? Who is it worth...